Our Report Shows Coal Ash Can Be Recycled to Beneficial Uses

“This report is truly groundbreaking – it demonstrates that the coal ash produced from Dominion’s coal-fired power plants can in fact be recycled to be beneficially used as a vital ingredient in concrete to improve highways and bridges throughout Virginia and the nation,” said Jeff Kelble, President of Potomac Riverkeeper Network. “Best of all, recycling this toxic ash would ensure that leaking ash ponds will no longer threaten nearby private citizen’s well-water or leach into the Potomac River, as they have at Possum Point and other sites across the Commonwealth for decades.”

The report was prepared for Potomac Riverkeeper Network and Southern Environmental Law Center as a counterpoint to the report due to be issued by Dominion Energy on Friday, December 1st. Dominion’s assessment of coal ash disposal options was mandated by a new state law passed in 2017 to address Dominion’s approach to the millions of tons of historically produced coal ash at its Virginia facilities. Prior to passage of the law, Dominion had proposed capping the coal ash pond at Possum Point with an impermeable cover and leaving it onsite permanently, despite a well-documented history of groundwater contamination and seepage of coal ash metals at Possum Point that leached into Quantico Creek and poisoned nearby private drinking water wells. 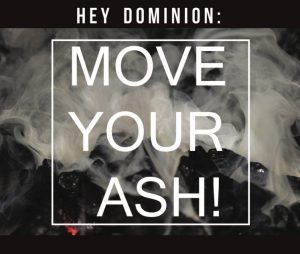 Please join us Dec. 4 from 10:00 – noon to hear the results of Dominion’s assessment presented to the State Water Commission on December 4th. The meeting will be located in Virginia State Capitol, House Room 1, 1000 Bank Street, Richmond, Virginia. Remember to bring a state issued ID to gain entry into the Virginia State Capitol.

“Virginia is at a crossroads when it comes to safely disposing of toxic coal ash, putting the onus on Governor Elect Northam to act in the best interests of Virginians and our precious environment,” said Phillip Musegaas, Vice-President of Programs and Litigation for PRKN. “If he puts into action the recommendations of this report, he would demonstrate his commitment to protecting the health and well-being of the state’s residents by requiring recycling of our own coal ash rather than importing it from China or Poland, as is currently the case. The alternative is to allow Dominion, a state utility, to continue to operate in a way that threatens Virginians’ health with dangerous poisonous and toxic coal ash metals left in leaking ponds to pollute our waterways and groundwater.”

Kelble concluded, “We truly hope that these important findings regarding the widespread and economical use of coal ash will be a lodestar to the new administration of Governor-elect Northam, when it considers its environmental priorities and the selection of staff to implement them.”